Would you like to know more about the theory of regional groundwater flow? Here are the main aspects of Prof. Tóth’s work, which fundamentally changed the way of thinking of subsurface processes. Check out how can it influence your surroundings!

“…Half a century of theoretical and empirical research as well as applied work have shown the rock framework to be hydraulically continuous thus allowing cross formational gravity-driven groundwater flow systems to develop in hierarchical patterns.” 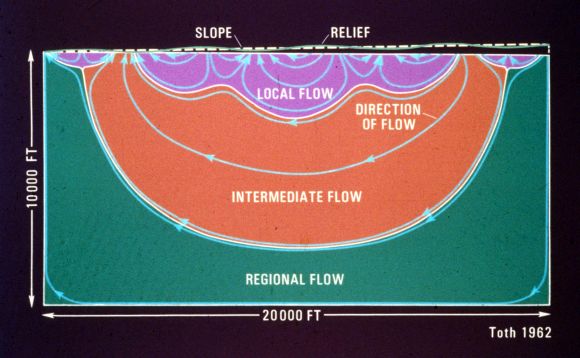 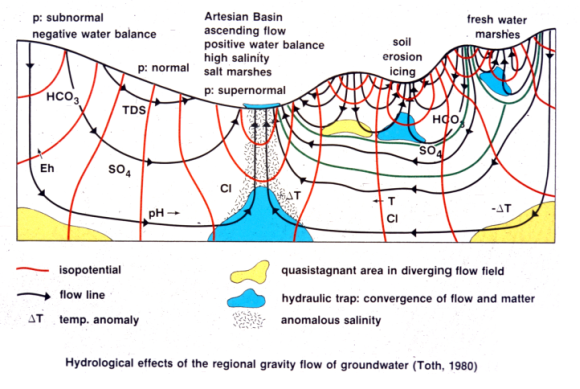 As such, they are active ubiquitously and simultaneously to great depths in the Earth’s crust. Individual flow systems exert a polarizing effect of natural hydrological, physical, chemical, botanical, thermal, biological, etc., processes and phenomena between their recharge and discharge ends with transitional ones in between.

Thus playing a determinant role in many earth processes, flow systems become the central linkage between various groundwater-dependent disciplines. They may be considered, therefore, the core concept of modern hydrogeology. Because of the impact and interdisciplinary position of this central concept, also the scope of hydrogeology can be expected further to broaden in the future as it is already manifest by the proliferation of new groundwater-dependent disciplines such as landscape architecture, groundwater ecology, remote sensing hydrogeology.

The evolution of Hydrogeology and Gravitational Systems of Groundwater Flow
(modified from Tóth, 2004, 1998; anticipated in Tóth 1972) 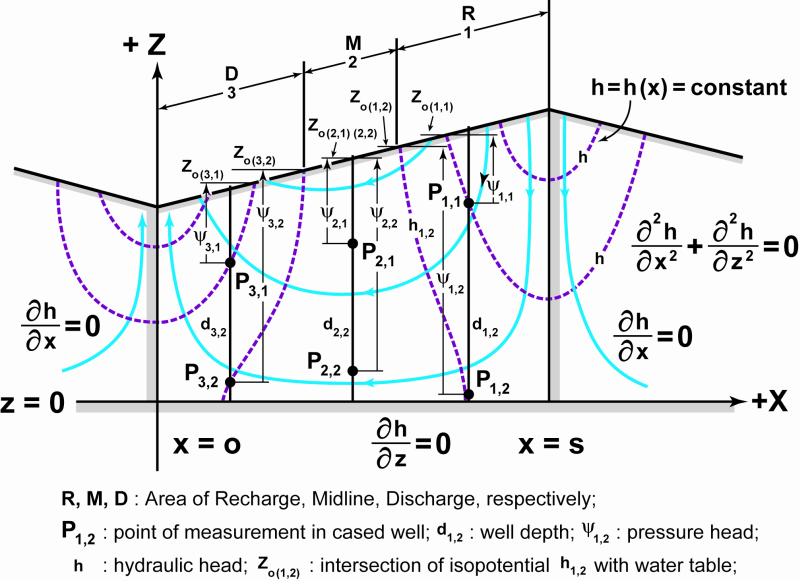 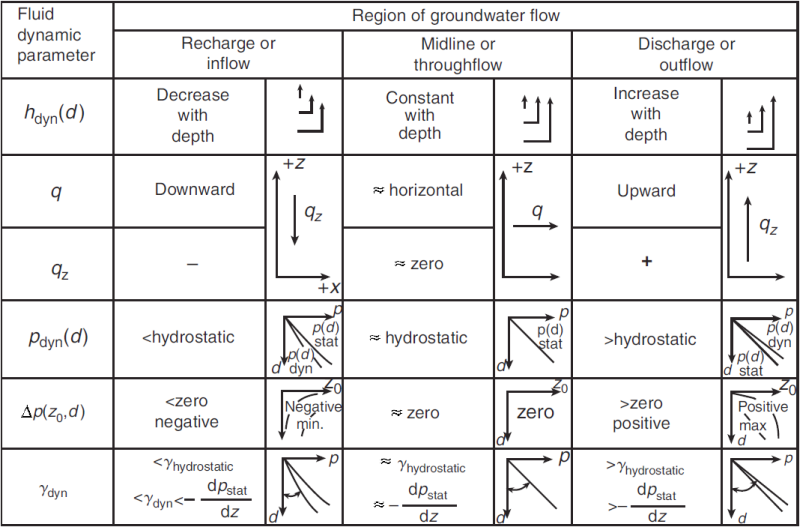 “Three functionally different flow-regimes can be distinguished in the basic pattern of unit basin. They are hydraulic regimes of recharge or inflow (R); transfer or throughflow (M); and discharge or outflow (D). These regimes are located in the areas, respectively, upslope, adjacent, and downslope, relative to the hydraulic midline. Relative to the water table, the direction of flow is descending, lateral, and ascending, respectively, in the three hydraulic regimes. The flow intensity (q) decreases with increasing depth and away from the midline area. In the lower corners of the flow field near-stagnant, or quasi-stagnant, conditions prevail.” (Tóth 2009)

Groundwater Flow as a Geologic Agent

The Paint Pots are a group of iron-rich cold mineral springs which bubble up through several small pools and stain the earth a dark red-orange colour. The Paint Pots were a major source of the ochre paint pigment for a number of First Nations groups prior to the 20th century. 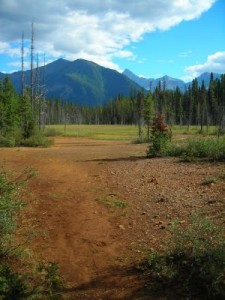 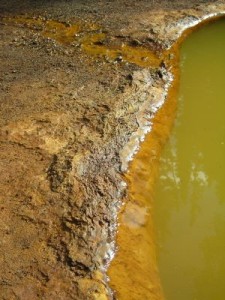 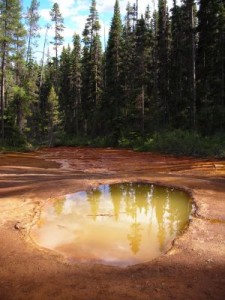 The lake is fed by saline groundwater, which results in zonal vegetation and salt precipitation on the surface around the lake. 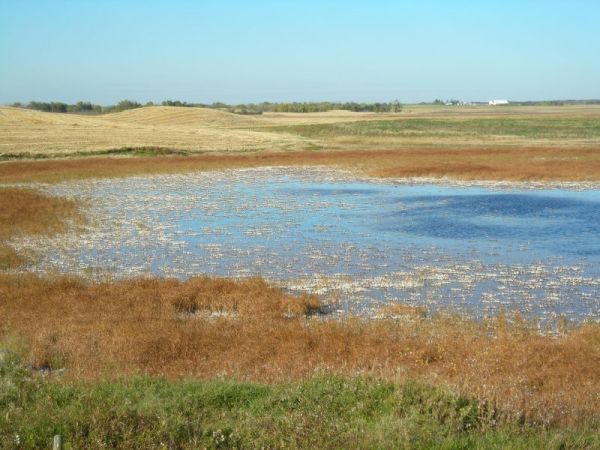 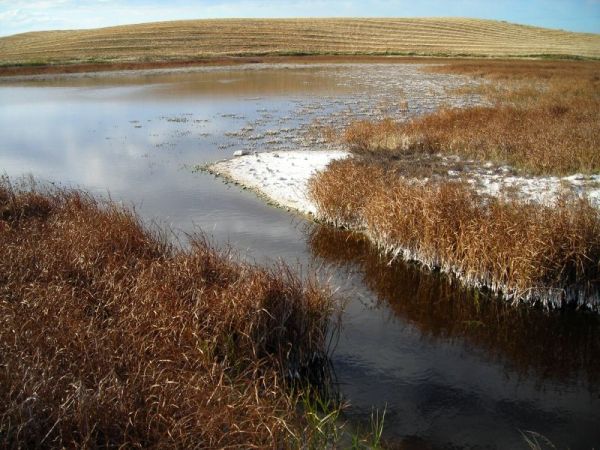 A lake near to Mudspring Lake, Canada) – Chemical & Mineralogical and Botanical phenomena

Liquefaction or “quick” condition occurs when the weight of the sediment is balanced by upward flow of water. The elevated pore pressure works against the effective stress of rock framework, which leads to the liquefaction of sediments. It usually occurs in sands, which have high clay content. 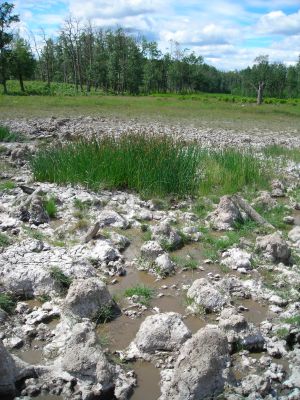 According to the phenomena related to the different hydraulic regimes in discharge areas the water table situated at shallow depth and actually it can rise above the surface like in Great Hungarian Plain. Due to the artesian circumstances 17 m tubing is needed for this well. 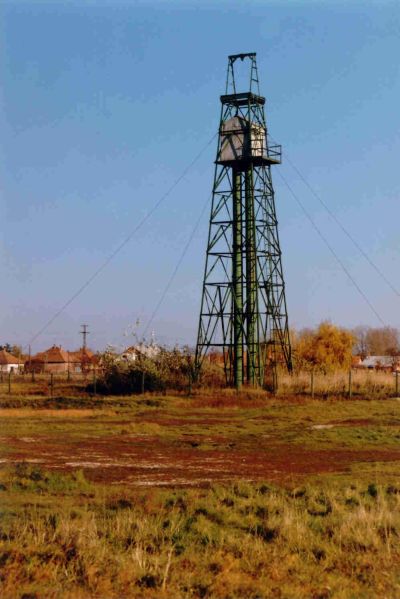 Vegetation types and patterns are significantly affected by groundwater flow which determines the moisture, salt and oxygen content of the ground. In discharge areas due to the high groundwater level anaerobic settings can emerge and peat formation can take place consequently. 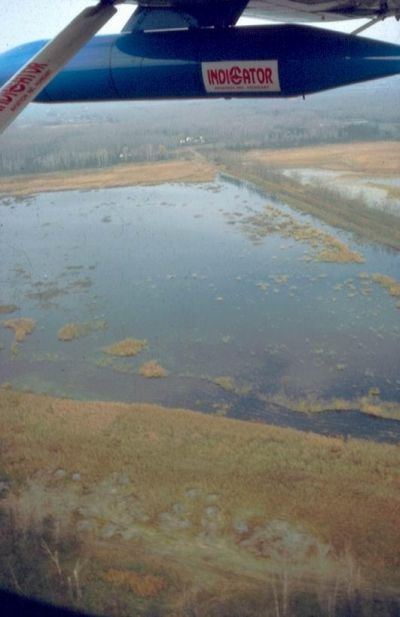 Accumulation and hydrologic phenomena (B. Angelus)

Groundwater flow as a geologic agent mobilizes, transports and deposits hydrocarbons as well. Thus petroleum accumulations can be viewed simply as products of groundwater’s moving geologic agency. As a consequence in the 1980s a new discipline was born creating connection between hydrogeology and petroleum geology. The new-born petroleum hydrogeology is the science and practice of applying hydrogeological principles and techniques to petroleum exploration and basin analysis. This approach is based on two fundamental facts. On one hand, fluids (water, oil, gas) migrate together in the subsurface, while differences can be observed in their flow directions pending on their density. On the other hand, the gravity-induced regional flow of formation fluids generates basin-scale distribution patterns and local-scale configurations of fluid-dynamic parameters, natural processes and phenomena, which can serve as diagnostic indicators. As a result, petroleum hydrogeology can treat hydrodynamic and hydraulic petroleum traps, as well as near-surface geochemical anomalies (so called geochemical chimneys), which can effectively contribute to conventional petroleum exploration. 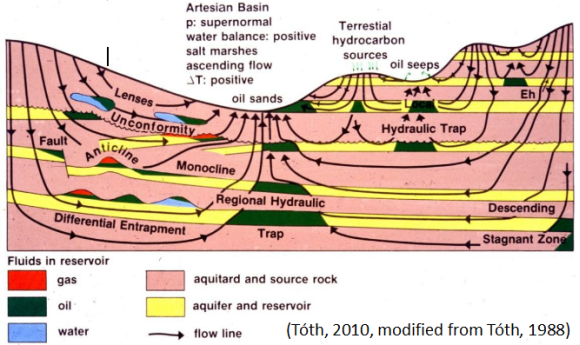 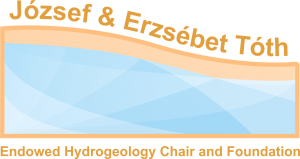